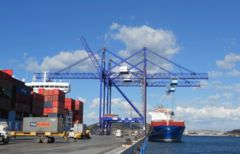 Grup TCB and Liebherr Container Cranes have developed a double boom ship to shore (STS) container crane to replace the use of mobile harbour cranes at the jetty pier in Nemrut Bay, Aliaga, Turkey.

Grup TCB operates its container terminal TCEEGE at the pier, where both sides of the pier are in operation. The use of a STS container crane now means the company can handle two vessels at a time, while improving traffic flow, safety and productivity.

The pier is 360 metres long and will have four double boom STS cranes, allowing up to four cranes to work on the same vessel simultaneously. This will increase productivity to 100 moves per hour per vessel. Two of the cranes have already been commissioned and installed by Liebherr.

Features of the double boom STS crane include easy switching from one boom to another. The machine trolley and spreader also rotate with the cabin, enabling the operator to directly face the vessel in operation.

The Liebherr drive system allows the STS to work on one side of the pier while having the opposite boom raised to allow berthing and unberthing on the other side of the pier.

The cranes have an outreach of 50 m on either side. The pier has a rail span of 36 m, which gives a total trolley travel of 136 m. The lifting height of the spreader above the sea side rail is 38 m and has a 15 m depth below the rail giving a total lifting height of 53 m. The cranes are fitted with a pair of 400 kW hoist motors and ship anti-collision systems.

Pat O’Leary, Liebherr Container Cranes managing director, said, “The double boom crane design was a unique engineering project in terms of innovation and scale. Liebherr Container Cranes manufactured the first (a smaller unit) double luffing crane in 1976 for Piombino Italy. We were able to draw on the many years experience in designing site-specific and machinery house trolley cranes, which helped us deliver the optimum solution for the Port of Nemrut Bay, Aliaga.”