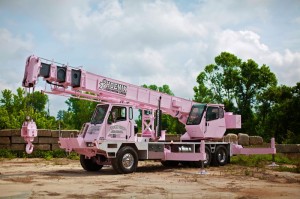 Phoenix Crane Rental, Mableton, Ga., is supporting the National Breast Cancer Foundation with its 40-ton pink Terex crane. The company is spearheading an effort within the crane industry and the community by donating a portion of the revenues generated by the Pantone® pink crane to the NBCF, whose mission is “to save lives through early detection and to provide mammograms for those in need.” Corporate sponsorships are critical in furthering and strengthening the NBCF’s mission to gain the advantage over breast cancer. Their initiatives have been lifesaving to thousands of women.

In sponsoring the NBCF and raising awareness about the nonprofit so that others will follow, the pink crane around town contributes substantially to free mammograms for women in need, promotes early breast cancer detection and provides educational programs that offer answers and advice to anyone whose life is touched by breast disease.

“Over the years, we have contributed regularly to a variety of charities, but have not gotten involved with any particular cause with passion until now” said Mike Phillips, President of Phoenix Crane. “We knew we had the resources to contribute and the willingness to become involved, we just needed the right partner. Looking at the NBCF, which is also a family-supported organization, we feel we have found our partner.