An All Terrain crane slipped off a narrow country road near Saint Vallier (Charente) in South East France yesterday, recovering it is proving to be something of a challenge.

Amazingly the crane did not roll and is balanced precariously on the verge of a raised road that passes over a flood plain. We have not been able to confirm who owns the crane a mid-size Terex, but a crane owned by the French division of TransGruma came to the rescue. 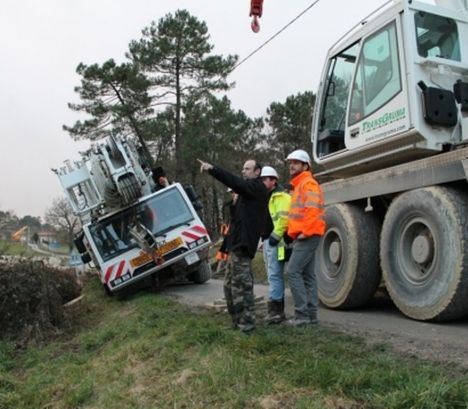 The crane will be a challenge to recover

The crane was working on the LGV high speed train line currently being built between Bordeaux and Tours and made a wrong turn as it exited the site and headed down the road that is officially barred to site traffic.

The challenge with recovery is that there is little space to set up the size of crane required and if that was not bad enough, over power lines are present. So a greater degree of planning and preparation are required, However a number of residences are apparently cut off by the blocked road.

The consortium building the line Cosea is working with the local community to alleviate problems, and blames the error on a subcontractor.