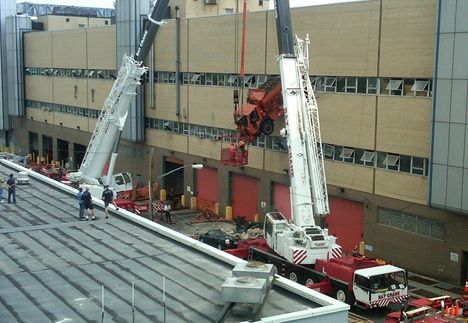 A truck crashed through the third floor wall of the New York Sanitation department workshops in Queens yesterday. The truck was left hanging precariously over the street some 10 to 12 metres in the air.

It is still not known how the 16 tonne salt spreader came to be breaking out of the building. It was being driven at the time by a mechanic that was doing some off season maintenance work on it -the third floor of the building includes a major vehicle workshop.

Bay City Cranes was called in to make the vehicle safe and then remove it, the company employed two mobile telescopic cranes one to lift the truck back into the building – the safest way of extracating the vehicle – and one to support a suspended platform from which the rigging crew could work.