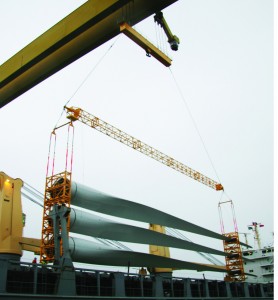 Modulift has designed and manufactured the giant lifting rig used for the fast and efficient lifting and assembly of the Repower’s 5MWgiant wind turbines at Harland and Wolff in N. Ireland. Responsible for the unloading and assembly of the clean power generators for Vattenfall’s Ormonde Offshore Wind Farm Project in the Irish Sea, Harland and Wolff also have to load them back onto the barges when assembled, for installation in the Irish Sea, creating a need for a rig that could multi-task.

Modulift’s remit was to design a rig which could not only lift the individual turbines and towers separately and assembled, but also lift three wind turbine blades in one go enabling the blades to stay in their calibrated sets for each turbine, at all times. Using the same principles of their existing standard products, Modulift succeeded in engineering a safe, lightweight, and cost-effective solution allowing Harland and Wolff to continuously store and load from January until the end of July.

To provide a solution which achieved the objectives required, Modulift designed a rig consisting of three elements which could be used in various configurations for the transportation and installation process of the various wind turbine components. The first is a giant 500t lifting beam, 16 metres long. Due to the nature of the lift and the need for minimizing the overall weight of the rig itself, Modulift had to be able to design and build the beam to weigh less than 40 tonnes without compromising its capabilities. The lifting beam was also designed to include inspection hatches and was built to ensure that these hatches would not compromise the strength of the beam. The beam was an exciting milestone for Modulift, proving their technical achievements in designing highly engineered lifting equipment to provide the ultimate solution for lifts of this size.

The second was another feat of engineering for Modulift in the design and fabrication of a 48.5m spreader that weighed no more than 9.6 tonnes to maximize the capacity of the cranes. The beam had to be easy to assemble in situ and capable of lifting the wind turbine blades, which in their set of three weigh 75 tonnes and span 61.5 metres.

“We are proud to be able to say that we designed and manufactured this solution for Harland and Wolff. We spent a lot of time planning the best solution for their requirements and still needed to be able to turn this project around in record time. With the barges already on their way from Germany we had to battle against the weather to get the components finished and transported to Belfast on time to enable the project to stay on schedule, with the first barge arriving in early January. The components were taken by ferry to Belfast on several trucks and with Belfast experiencing its coldest winter in 16 years, snow storms threatened to delay delivery. Luckily the dedication of all parties involved enabled both the Lifting Beam and the Lattice Spreader to be delivered before Christmas, and tested and commissioned in time for its first use in early January”, said Sue Caples, Operations Director and Head of Engineering at Modulift.

As demand for heavy lifting is set to increase, with Modulift receiving a record number of orders for it’s MOD 400 so far in 2011, Harland and Wolff are expecting to use their new 500 tonne lifting beam on many projects to come.

In addition Modulift are now standardizing their new “giant” Lattice Spreaders for future customers looking to lift very long loads up to 100 tonnes, keeping the same passion, accountability, and quality of their existing products.