Crews were cleaning up a construction site after a crane overturned in north Houston on Friday.  Officials said the crane, which was being used for a Metro Rail project, was picking up rebar at 1650 North Main near Hogan when it toppled over around10:45 a.m.

Authorities said the crane snapped a power line, which fell onto a nearby fast-food restaurant. The crane then smashed into a white truck, officials said.

North Main was still closed as of Friday afternoon because power lines were still strewn across the road.

No injuries were reported. 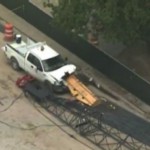