Kiel, April 2nd 2014: the number of heavy cargo and project loads being handled in Kiel using the port’s efficient port cranes or RoRo ramps is on the rise. The latest example has been what is currently the most up-to-date telescopic mobile crane to be built by the firm of Liebherr. It was shipped directly to Klaipeda in Lithuania on April 1st on a ferry ship belonging to DFDS Seaways. The Type LTM 1750-9.1 mobile crane is used in power plants and refineries as well as in bridge building and in the installation of wind power plants. The 750 ton crane carries 204 tons of ballast, a 52 m telescopic boom and a 91m luffing jib and has an overall height of 154 m. It can be deployed in any location. 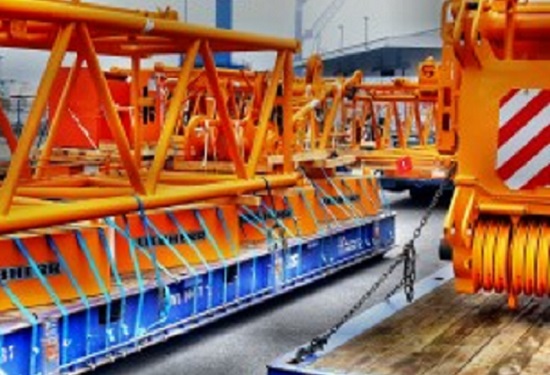 Dr Dirk Claus, the Managing Director of the Port of Kiel (SEEHAFEN KIEL GmbH & Co. KG), said “heavy cargo headed for eastern Europe is pre-destined for transport by ship from Kiel’s Ostuferhafen. On the one hand, our port facilities and services are tailor-made to cope with the special demands made by heavy, extra wide and extra high cargo consignments. On the other, the ships which sail to and from Kiel are also equipped to cope with such cargo. The route across the Baltic is fast and safe”. The shipment of the Liebherr mobile crane was organised by the firm of CIS Cargo – which is also based in Kiel.

Liebherr representatives were in the Ostuferhafen on April 1st to inspect port facilities and their capability and to find out how the transport project was being organised from delivery to shipment. The basic crane chassis arrived under its own power while the other crane components were delivered by truck. The crane was dismantled and prepared in advance for on-shipment by rail from Klaipeda. Before it was shipped by sea, the crane’s individual components were transferred and securely lashed onto low loaders under the supervision of experts. Where required, heavy cargo consignments like this can be temporarily stowed in the open or in warehouses in the Ostuferhafen. Loading of the crane onto the ship was carried out by the personnel of SEEHAFEN KIEL Stevedoring GmbH, who also supervised the loading transfer and lashing. The Liebherr mobile crane components were loaded as rolling cargo across the heavy-duty hydraulic RoRo ramp at the Ostuferhafen’s Berth No. 7. The ramp is able to bear an individual axle load of 20 t.

The Ostuferhafen is Kiel’s cargo and logistics centre. Last year three million tons of cargo were handled here, most of it in liner shipping traffic to and from the ports of the eastern Baltic. As well as trucks, trailers and containers, an increasing volume of heavy cargo and project loads is now being shipped. They include agricultural machinery, locomotives, ships’ engines and silos. At the start of this year even a complete brick plant was shipped in parts to Russia. RoRo and RoPax ships of DFDS Seaways operate liner shipping services six times a week from the Ostuferhafen to Klaipeda and twice weekly to both St. Petersburg and Ust-Luga in Russia. Ships can be loaded and unloaded simultaneously at different berths in the Ostuferhafen either by a port mobile crane capable of lifting up to 140t or via RoRo ramps.