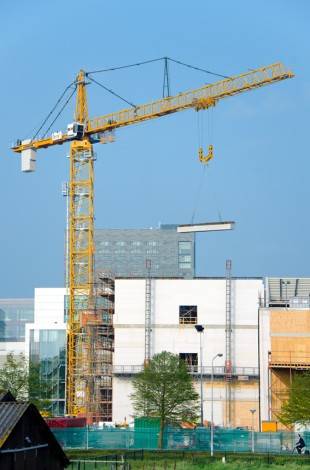 Since its successful launch of the 1000 EC-H at the Bauma 2013 in Munich, the largest standard crane in the EC-H series has been proving its worth in prestigious projects around the world.  Several 1000 EC-H cranes are currently operating in countries such as the Netherlands, Great Britain, Mexico, United States of America, Peru and Russia. One of their current sites in Europe is the new-build of the Erasmus Hospital at Rotterdam in the Netherlands.

The construction of the new Erasmus Hospital in Rotterdam in the Netherlands is just one of the sites at which the 1000 EC-H 40 Litronic is currently operating. The 1000 EC-H managed to outscore its rivals during its transport and erection time at this site in the centre of Rotterdam. The transport sizes and weights have been so enhanced for this large crane that no special transport was required. The jib parts can be transported nested neatly inside the 1000-HC tower system to save space.

The practical erection technology used by the 1000 EC-H ensured that it was erected efficiently and safely. The slewing platform including the switchgear cabinet and cabin were placed on the tower in a single hoist. The “Connect and Work” quick-release fastening system which Liebherr offers as standard on all its tower cranes reduced erection times. The crane was fully erected and ready for use within just four days with a hook height of 67.9 m and a radius of 60.0 m.

The new Erasmus Hospital is being built in the centre of Rotterdam. The construction process has been divided into three phases and on current estimates it will be completed in 2017. The total floor area of the hospital is 185,000 m² and the highest building will be 120 m in height. The complete building is being erected using prefabricated concrete parts.