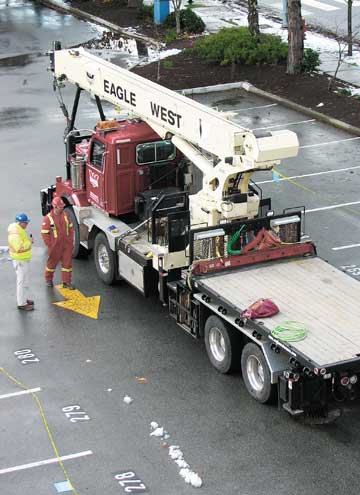 When the crane was first invented (that would be around the time of the Ancient Greeks), it wasn’t very easy to move around. The whole practical application of the early crane was basically rooted in the idea that a solid stationary point could provide a fulcrum for applying an upward lifting force: which is why we see the anchor holes for static cranes in the front of the remains of Ancient Grecian temples and villas. The legs of the crane were inserted into these holes to provide the fulcrum force for lifting pediments and cornices up to their rightful place atop their columns. The mobile crane was an idea that came along much later, in inevitable step with the march of modern technology: and it’s an idea that has single handedly changed the way that people build cities.

The whole idea of the moving crane has been around for a little while, of course: but it wasn’t until late 20th century (by late 20th century we mean the second half thereof) technology really started to get a grip on what could be done with multiple axles, that the idea really reached its practical application. The moving crane is able to lift almost as much as cement founded static crane: the mobile crane uses multiple axles to support a huge truck bed, which can be manoeuvred into practically any position by the independently turning wheels.

This flexibility, combined with the actual size of the average moving crane (very large), has enabled modern construction companies to get into some surprisingly small spaces. One very apposite example: a seven axled moving crane was recently manoeuvred into a single lane right angled sidestreet turning in the middle of London, thanks to some skilful driving and the independently excellent turning circles of its separated axles.

The modern city is rebuilding itself from within. As older buildings become disused or abandoned, councils are stepping in to reclaim, revitalise and re-sue. There’s a problem, though, which only the mobile crane is able to solve. The modern city has had a lot built in it in the interim between having its original buildings put up and having to have them refurbished. And that means, in a lot of cities, that a static crane simply cannot be founded close enough to a reclamation or refurbishment project to be of any use. The moving crane is the perfect solution. It can be called in when lifting is needed, and driven away again when lifting is not required. It can be used from right next to a building site, or even angled in with it boom arm from a couple of streets away. In other words: the mobile crane is enabling the modern city to restore itself, in a way that the static cranes that originally built it can no longer do.

There are plenty of additional reasons to hire and use moving cranes, as opposed to statics. No costly inspections, no dangerous build times and no unnecessary use of space are all good ones. As is the lack of need to pay an operator a salary rather than just paying piece work. The moving crane is bringing convenience to the building trade from every angle.