Carpenter Crane Hoist worked with Midwest Cleanroom Associates to install lifting equipment that met a variety of criteria, the most notable being the design of a crane that wouldn’t contaminate the lenses on the James Webb Space Telescope.

The National Aeronautics and Space Administration’s (NASA) James Webb Space Telescope (commonly referred to as the JWST) will be a large infrared telescope with a 6.5-meter primary mirror. The project is working to a 2018 launch date.

The telescope incorporates a folding, segmented primary mirror, adjusted to shape after launch; ultra-lightweight beryllium optics; detectors able to record extremely weak signals, micro-shutters that enable programmable object selection for the spectrograph; and a cryocooler for cooling the mid-IR detectors to 7K. 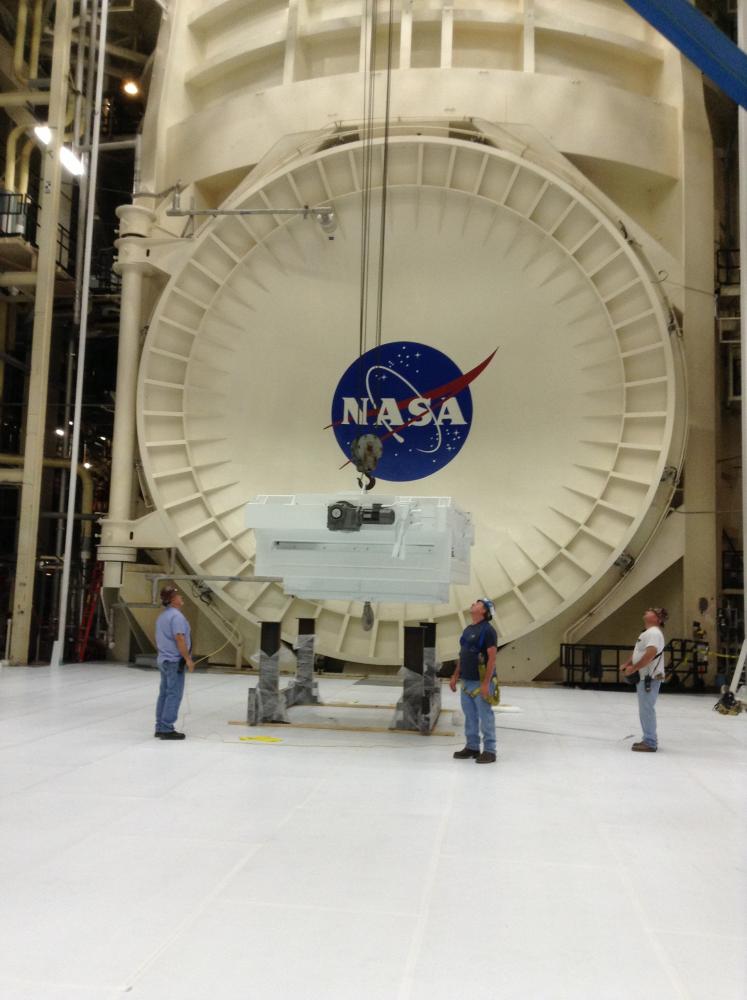 The Webb will be the premier observatory of the next decade, serving thousands of astronomers worldwide. It will study every phase in the history of the universe, ranging from the first luminous glows after the Big Bang, to the formation of solar systems capable of supporting life on planets like Earth, to the evolution of the solar system.

Vallejo, California-based Carpenter, part of the Carpenter Group, had worked with Midwest previously on a project at the Fermi National Accelerator Laboratory, which investigates particle physics. It was invited to bid on the JWST project where the telescope required a clean environment, mainly due to the lenses. If specific molecules were to get on a lens it would cause catastrophic damage; replacements cost $25 million.

Carpenter brought to the table years of experience building cranes and hoist systems for high-tech manufacturing, clean room, food industry, and corrosive environments. It provided NASA and Midwest with a complete service from design and engineering through fabrication and installation.

Carpenter Crane was selected from three crane companies that had submitted proposals. Dane Oliver, general manager, Carpenter Crane Hoist, put this success down to a reputation of meeting deadlines, hitting budget, and delivering a quality product from its facility on the Mare Island Naval Shipyard, a decommissioned naval base.

The crane runs on 224 nylon wheels inside a customized track. The nylon out-gassing originally exceeded the allowable limits but Goddard found a solution. The wiring for the crane couldn’t have any exposed PVC wiring due to this out-gassing.

“We used a TPE-coated wire for any exposed wiring,” Oliver explained. “There were specific lubricants that could be used.”

Carpenter trained a NASA crew on operation of the crane, which was installed using an existing overhead crane in the facility above the clean room. It was used to assemble the clean room and install the crane. The clean room will be used for two picks of the JWST before the facility will be contracted out for satellite testing.

“The design of the crane has never been done before; it was a first even for CCH,” said Oliver, of the custom-made system.

Two tests were required. One was a 200% static load test, which took place at the Carpenter facility, in addition to a 125% dynamic load test carried out after the crane was completed.

The crane was installed in four trips. The first was to install the runway and bridge beams and the second was to install the hoist. The third was to complete final assembly and start up before, finally, training and load testing was carried out at NASA.

“White is a standard clean room color we use for our cranes. There was a specific paint that was required for the contamination issues,” said Oliver. “The team we have is what makes it possible for us to do what we do. Our two lead fabricators have been working with us for over 18 years.”

Carpenter Crane Hoist was established by general manager Dane Oliver 18 years ago, at the request of the owner of the Carpenter Group. Oliver has been working with clean room technology for 25 years.

The company’s focus remains on clean room lifting with customers largely representing the major players in the semiconductor industry and semiconductor equipment manufacturers and pharmaceutical companies. There are 10 people employed directly by the division in addition to the shared staff of the group. CCH has a complete manufacturing facility as well as a class 1,000 clean room for manufacturing and assembly. “The cranes we build are custom made to fit the customer’s requirements and applications,” said Oliver.