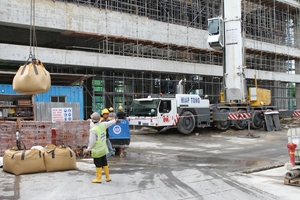 The Liebherr MK 110 mobile construction crane assisted in the construction of a four-storied extension to a factory in the Tuas industrial area of Singapore. The building contractor G Projects hired the machine for all the incidental lifting operations from the rental park of the local heavy load specialist Hiap Tong Corporation Ltd, for a period of two months.

The MK 110 was operated with maximum hook height of 33 m, whilst the entire working radius of 52 m was utilised. As required, luffed jib positions of 15°, 30° or 45° were also possible for the further adjustment of the hook height.

The extension to the factory is directly behind the existing building. The only means of access is a street that is a mere 5 m wide. The mobile construction crane had to traverse a narrow curve to be able to be set-up alongside the building. The size of the set-up area was only approx. 8 m by 20 m. This was the only place at which the MK 110 could be built-up.

“The choice fell on the MK 110 because it is able to reach the most confined of areas, whilst simultaneously having the load capacity and reach that one expects in a large tower crane or a large mobile crane,” according to Patrick Ng, the manager of Hiap Tong.

The MK 110 has a maximum lifting capacity of 8 t and can lift 1.8 t at its full working radius of 52 m. The transport unit of the Liebherr mobile construction crane is very compact, with a length of only 16.65 m and a width of 3 m. The MK 110 is mounted on a chassis with five axles and active rear axle steering to be able to access extremely confined building sites.

Hiap Tong was established almost 35 years ago, and is a leading supplier of hydraulic lifting and transport services in the fields of shipping, petrol chemistry and the building industry in Singapore.