A double deck bus collided with a load of rebar being lifted by a tower crane on a site in Sidcup, Kent yesterday. The incident happened opposite the railway station, the load struck the inside top corner of the upper deck smashing the window. No one was injured in the incident, although a seven year old girls sitting in the seat nearest was treated for a minor cut from a glass fragment. 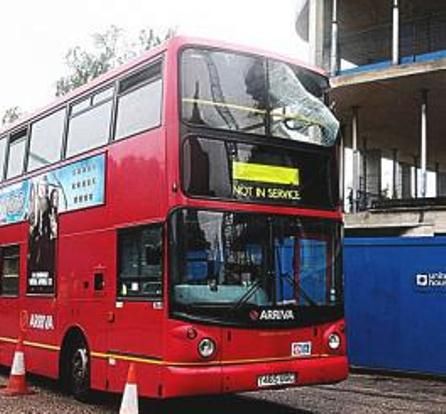 The incident was referred to the Health and Safety Executive.

We are not sure how the collision occurred, we understand that the reinforcing bar was being unloaded from a truck in the street, but normally the truck itself blocks the path of any other vehicle and it is usually cordoned off. We assume that the load swung out slightly from truck just as the bus was squeezing past in the open lane? This is a two lane street.

This could have been much worse, it show though that in such tight quarter a person needs to be in the street to stop traffic passing as each load is lifted well clear of traffic.