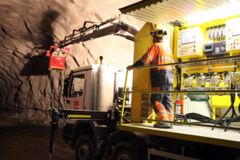 Norwegian construction company, Norska Veidekke, is using a Hiab crane fitted with a work platform to help secure the roof of a Swedish road tunnel currently under construction.

The 4 km road tunnel in Alba Nova at Roslagstull in Stockholm is due for completion in six years time. At present a million cubic metres of rock is being removed and the basic tunnelling should be finished next year.

Once the rock has been blasted and the loose fragments of rock cleaned away, holes are drilled and injected with cement to fill out cracks and hold the surface layer together. The Hiab crane is mounted on the cement injector vehicle and allows the operator, in the basket, to reach the drilled holes with the cement injector.

The injector vehicle is described as a factory on wheels. The entire device and the vehicle are electrically driven because of the limited clean air supply in the tunnel. There are two injector vehicles used in the Norra Länken project. One of these has just been taken into service and is a four-axel Mercedes Actros 4141 equipped with a Hiab XS 166 E-4 HiPro.

Site manager, Peter Antonsen, said, “We have another crane on the older vehicle, but when we needed an additional crane, the manufacturer of that model was unable to meet the new MEWP (mobile elevated work platform) requirements that now apply across the EU to cranes equipped with aerial work platforms. So we decided on a Hiab instead and the actual model was determined by its reach. A quite small electric pump takes care of the control hydraulics. We use it only as a personnel hoist.”

The injector, which is connected via a hose to the on-board “cement Factory,” is manoeuvred manually into position in relation to the sleeves on the drill holes in the rock wall.

“The vehicle contains two mixers. Four stirrers and four pumps, which discharge the cement mixture at a pressure of 50 bar,” says Mr Antonsen.

The operator moves the work platform with his radio-controlled operating device. In a normal working day between 10 and 20 t of cement is injected into the rock, that is 70 to 100 lt into every 25 m deep hole.

The entire rig including the crane and injection equipment, cost almost 7 million kronor (€660000).