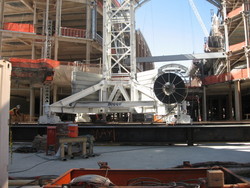 Bigge executed the extraordinarily rare and technically challenging task of erecting a luffing tower crane on a traveling chassis base for work on a large retail center in downtown Salt Lake City.  Bigge not only provided the crane, a Comedil CTL 340, with a mast of 137 feet and a 131 foot jib, but also erected it and installed the rail system that will transport the crane as it works over the next year to help build the center.  The unusual configuration was devised and delivered by Bigge and the contractor to suit the specific needs of the complex project. Rather than the more traditional method of using multiple cranes, the Comedil CTL340 will be able to travel a range of 200 feet, allowing for more coverage at the heart of the center. This is the sixth tower crane Bigge has provided for this project, and the fourth luffing crane. Bigge has also supplied numerous man and material hoists for the project.

Liebherr to expand use of carbon fibre technology