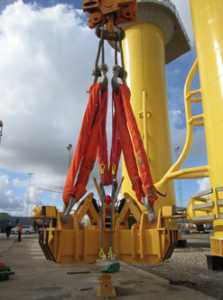 It no longer needs to take an hour to get ready to lift the 370 ton heavy offshore wind turbine foundation parts, also called Transition Pieces or TP’s, from dock to vessel – and from vessel on to the offshore monopiles. Fyns Kran Udstyr (FKU) has developed a hydraulic yoke that makes the TP ready to lift within 10 minutes – only needing one employee to handle and adjust the TP.

Since the TP is now plumb and level, the risk of tilting when the TP is placed onto the vessel is minimal. The same safety remains on sea, where it is even harder to handle the enormous foundations, when they are lifted into place over the monopolies.  Enhanced safety and great savings.

The newly invented yoke is developed by Danish engineers from Fyns Kran Udstyr, and approved by Germanisher Lloyds. The engineers have documented every detail of the unique construction in accordance to EN Norms. From the beginning the goal has been to improve the safety and working conditions compared to the known method with Pad Eyes, and at the same time speed-up the process and thereby save money at every lift.

Both improved working conditions and enhanced safety, are of great value for our customers, but also the large time savings of approx. 50 minutes per wind turbine is a strong argument, Torben Kofoed, Sales Manager at FKU, says.

Storms can put the work on sea on hold, but now even short breaks in the storm can be used more efficiently. The result is lower operation costs, because of fewer hours with the vessel and staff on site, he explains. 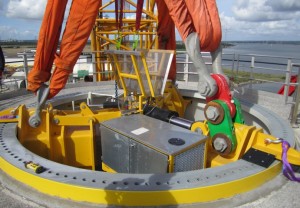 The lifting yoke from FKU has passed its test at the world’s largest offshore wind turbine park, London Array which is why Torben Kofoed sees a great potential for everyone who handles TP’s. Even the users say that working with the new lifting yoke is fast and safe.

We only needed one person to take care of the rigging, and lifting from dock to vessel took no time … “simply the best and fastest handling of TP’s to date”, stated one of the users on the job.