Membrey Transport and Crane Hire played a major role in the successful relocation of a rare Rothschild giraffe from the Melbourne Zoo in Victoria to the Mogo Zoo on the southern coast of New South Wales, 800 kilometers away. For the job, they utilized a Terex® AT-20 Pick and Carry crane. 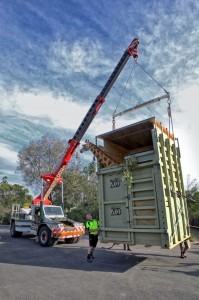 Due to the delicate nature of the cargo, Melbourne Zoo called in Membrey’s Transport and Crane Hire to transport Tanzi, the 10 year old, 4,8 metre tall Rothschild giraffe. The move, as part of the regional breeding program, would also see Tanzi reunited with her sister Shani.

“We have moved a variety of large and small exotic zoo animals for around 30 years,” said Craig Membrey of Membrey’s Transport. “For this move, we were required to lift and transport the animal in a specially made giraffe crate and selected our Terex AT-20 Pick and Carry crane as the best equipment for this task.”

To minimize stress during the move, the Melbourne Zoo conducted more than two months of crate training to ensure Tanzi was relaxed and comfortable enough to travel in the crate. As well as the potential for emotional strain, transporting such a tall and heavy animal also presented a number of logistical challenges.

“Moving animals of this size requires detailed route planning, such as avoiding low bridges, while also ensuring minimum impact on the animal by completing the move in the shortest possible time,” Craig said.

“The Terex AT-20 Pick and Carry crane was ideal for this application. It’s smooth controls gave the crane operator the ability to position the crate with gentle, fluid movements throughout the operation.

“These highly versatile road cranes can be dispatched quickly to wherever they are needed via any road, and have the maneuverability, power and versatility to lift almost anything, anywhere,” Craig added.

About Terex Pick and Carry Cranes

Terex Pick & Carry cranes live up to their name with the strength and easy operation to pick up heavy loads, and articulated steering flexibility to move in tight spaces. Offering high road speeds to get to the jobsite quickly, their pick and carry capability on tires needs no outriggers, to get set up and working almost immediately. The Terex Pick & Carry Crane range includes three models offering lifting capacities ranging from 15 to 25 tonnes (17-28 US tons) incorporating many features which enhance safety, driver ergonomics and improved machine operation

Terex Corporation is a diversified global manufacturer of a broad range of equipment that is focused on delivering reliable, customer-driven solutions for many applications, including the construction, infrastructure, quarrying, mining, shipping, transportation, refining, energy, utility and manufacturing industries. Terex reports in five business segments: Aerial Work Platforms; Construction; Cranes; Material Handling & Port Solutions; and Materials Processing. Terex offers financial products and services to assist in the acquisition of equipment through Terex Financial Services. More information can be found at www.terex.com.