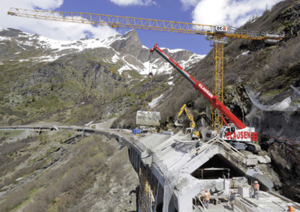 The structures, which are called galleries, protect traffic routes along the Simplon Pass from avalanches and land slides.

Clausen was asked to remove and replace part of one of the galleries at an altitude of 2,000 metres. The LTR 1060, which was chosen due to space constraints and weight issues, was used to hold blocks of concrete from the old gallery as they were cut into sections.

The 60 tonne capacity crane then loaded the concrete sections weighing between 7 and 22 tonnes onto trucks. With this part of the job complete the crane was used to remove the supports from the gallery.