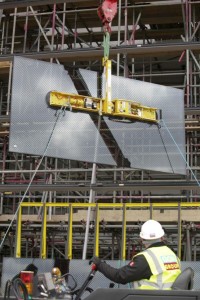 One of GGR’s mini spider cranes, a 6 tonne capacity UNIC URW-706, was used with an MRTA611 Six-in-Line glass vacuum lifter to help glaze the external walls of the venue now that the temporary seating area used for the London 2012 Olympic Games has been removed.

Filmed by a BBC camera crew for BBC London News, the spider crane and glass sucker were able to lift the first of the 1.5m x 3m glazed panels from a ground level stillage and install them at a 16 metre height. An impressive 628 pieces of 250kg screen printed glass are to be fitted which will cover 2800m² on the east and west sides of the Aquatics Centre and let plenty of natural light into the swimming pool area.

GGR also previously installed glazing during the construction of the Aquatics Centre in 2011, using a UNIC URW-506 mini crane and 1000kg capacity Hydraulica 1000 glass vacuum lifter to fit glass panels to the underneath the starting blocks inside of the pool.

Dennis Hone, Chief Executive, Queen Elizabeth Olympic Park said it will take 70 days to install the 628 panes of glass that make up the external walls of this fantastic building. Each pane weighs 200kg and it takes a team of six people to install a single pane. We expect the team to get through 10 panes a day and finish the outside of the Aquatics Centre in late September. Once complete the Aquatics Centre will be a public swimming pool as well as an elite training facility and competition venue. We are on track to deliver a fantastic new destination and a lasting legacy for east London and are looking forward to the full opening of the Park in the spring next year.”

The concert is one of a series of summer events which will give a taster of what people can expect to see next year.

Since last autumn, huge progress has been made removing temporary venues, improving transport connections across and into the Park, and creating beautiful parkland areas. This building and landscaping work will continue at pace to get the Park ready for next spring.

Queen Elizabeth Olympic Park will open in phases as the construction works completes. Parts of the North Park – including the new Timber Lodge cafe, Tumbling Bay playground and the Copper Box will open to the public at the end of July. It will be free to visit the parklands, cafe and playground.