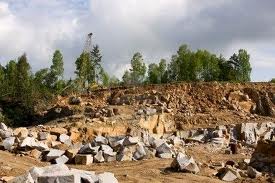 A man died when a mobile crane toppled over at a quarry in Lancashire.  Emergency crews were called to the Scout Moor quarry in Edenfield, near Ramsbottom, after reports that a crane had crashed at 11:55 BST.

Police said the mobile crane is thought to have left the road at the quarry and toppled over before coming to a halt.

The driver, whose name has not been released, died at the scene. The Health and Safety Executive (HSE) is investigating with Lancashire Police.