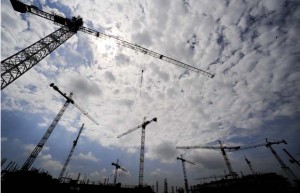 Tower cranes can be higher and use smaller bases, according to new Technical Information Notes from the Construction Plant-hire Association Hire (CPA), which have been approved by the Health and Safety Executive (HSE).

Under the existing Europe-wide wind map, much of England and Wales was in region D, with Scotland in region E.

Now a recently published UK-specific wind map of actual storm wind speeds has allowed the whole of England and Wales to be re-classified as region C, with Scotland and Northern Ireland in Region D.

The CPA’s Tim Watson said this means unsupported tower cranes can generally be built higher and the amount of ballast in the base can be decreased.

However, in high and exposed areas such as the Pennines, Dartmoor and central Wales, individual assessments will need to be undertaken.

Watson pointed out that as the wind speed doubles, the force on a crane goes up by a factor of four. The notes recommend an out-of-service wind speed of 60km/h (38mpg or 16.5m/s) rather than the manufacturers’ maximum of 72km/h (45mph or 20m/s).

The notes say operators should take a crane out of service and descend to ground level before the limiting speed is reached. Also, operators shouldn’t lift large, light objects (such as shuttering), which can be blown out of radius if the don’t feel they cannot control the load.

There is also emphasis on the manufacturer’s lower limiting wind speed for erecting, dismantled and climbing tower cranes and for folding the jib of a self-erector.