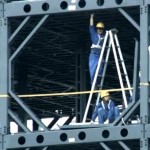 We have been sent a time lapse video of a 16 storey hotel and spa being built in just over 90 hours thanks to lots of labour long working days and the efficient use of mobile cranes and suspended platforms.  According to the claims no accidents were recorded in spite of some pretty horrific work at height practices and lack of edge protection. The building was erected in China in June, clearly the design, planning and organisation are fantastic, no question about it. But even then 90 working hours sounds farfetched. No matter if you believe the timer or not it is a very interesting example of efficient construction in action. The building is a strong performer in terms of insulation and lack of waste during construction. It is also built and tested to Level nine earth quake resistance.