The Kran und Baumaschinenmuseum, in Rattelsdorf, Germany, is a museum with a difference. It displays a mixture of historical cranes, excavators, bulldozers and trucks.

In addition to these machines, hydraulic and cable excavators are also on show, alongside a unique collection of wheeled loaders, scrapers, mixers and road rollers. Among the collection, which numbers around 160 units, is a rare series of tower cranes dating from 1912 to 1972. There are 25 of them at the museum, of which 13 have been renovated and many have been re-erected. The earliest one is the 1912 Kaiser TK B. 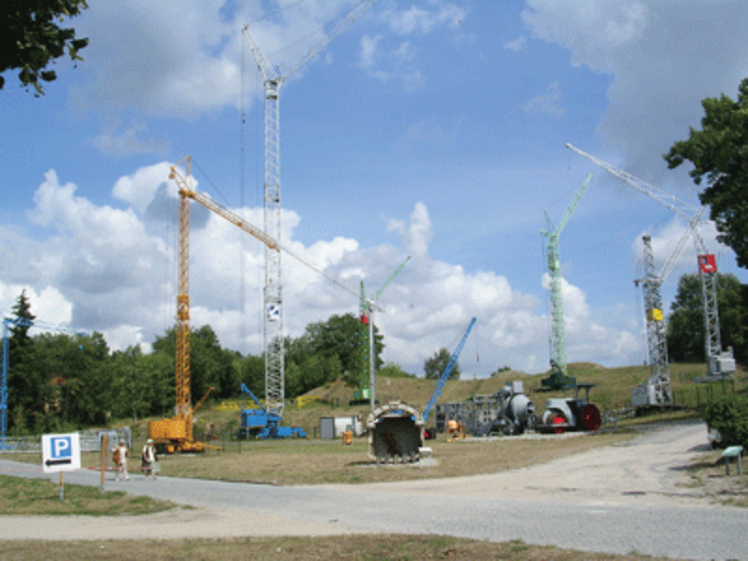 The museum was founded in 1994, after the AG Kran und Baumaschinenmuseum society acquired a selection of old construction machines. In 1996 further equipment was donated to the museum for display.

The aim of the Kran und Baumaschinen museum is to illustrate the continuous development of equipment throughout the crane and construction industry. To date, the collection shows how technology has progressed over the years and most of the machines on show represent some of the most important stages in technology.

One of the many highlights is a Liebherr TK6 tower crane, one of the first built by Liebherr. The TK6 was designed after World War II, by construction company entrepreneur Hans Liebherr from Kirchdorf in Swabia (Southern Germany). Liebherr had identified the need for tower cranes to meet the post war challenges of reconstruction and so set about designing a crane that could be moved between sites with ease. One main factor of his design was that the crane had to be easy to dismantle and erect.

Hans Liebherr committed his idea to paper and in 1949 he displayed his first tower crane, a type TK10. From early 1950 onwards, the first orders of Liebherr tower cranes were made. Using the experience gained by the TK10, Hans Liebherr continued to develop further crane types and went on to design a series of tower cranes. These types were the TK6, TK14 and TK3.6. In 1951, the TK6 was developed into the TK8.

Unfortunately, there are no TK10s left in the world, comments Dirk Moeller, museum chairman, and only two of the first Liebherr tower cranes have survived: a TK6 from 1950 and a TK8 from 1951. The TK6, which took 13 years to acquire, arrived at the museum in August 2012 and is awaiting restoration. It accompanies the other Liebherr developments in the crane sector already on display.

Alongside the number of different machines from other industry sectors, the museum is looking to introduce an exhibition hall into the museum to display a range of historical construction tools and handmade models. It is also hoped that some of the older machines will eventually be housed inside to prolong their life.

Members of the museum’s support group, the AG Kran und Baumaschinen Museum Society (AG-KBM), aim to co-ordinate future initiatives for the museum. So far they have been involved in a number of attempts to obtain various machines that have an interesting historical aspect. They also plan to expand the technical support and maintenance of the museum. It will include carrying out functional tests, maintenance, co-ordination of reconstructive work, and the dismantling or erection of new display stock.

The AG-KBM will also be involved in discovering the historical importance of the subjects and helping to keep a stock of spare parts to help with maintenance of the existing displays. Funding for parts of the museum comes from private members of the support society.