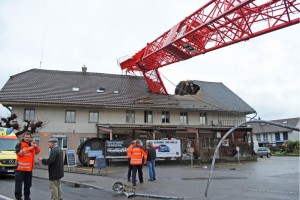 Studen, Switzerland. A 45 Meter Tall Wolff Tower Crane on a cross base fell injuring two people on the ground and the operator of the crane. Also a building that was occupied has been virtually demolished and surprisingly no one was reported as injured. Two cars were struck by the jib of the crane and were certainly a total loss. They were virtually pancaked. 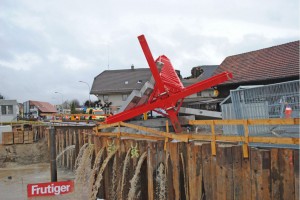 The crane fell backwards onto it’s counter jib which had punched into the building. It stayed partially airborne because of this but the quick stop dislodged the cab from the crane tossing the operator in it on to the other side of the building. The operator is listed as seriously injured but I’m not finding any listing of the extent of those injuries. 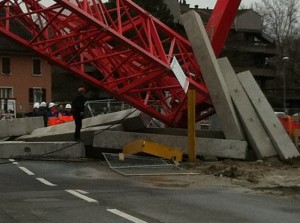 In one of the pictures it’s pretty clear that the cross base was sitting on soil that was under water. The concern with that is any under mining and is the soil staying compacted while it drains? I have had one crane that had a base below the water table during the winter. I showed up and the base was completely under water and the water was moving. The soils engineer had used sand and gravel to achieve his desired compaction in my case and I can only hope that they did the same on this site. Even with the soils engineering being done, I spent that entire winter thinking about that crane. As I look at the base though, one side of that cross base does appear to be lower than the rest which makes me really want to see if the soil has eroded over there. Clearly ballast was on the cross base and hopefully that was the correct weight. 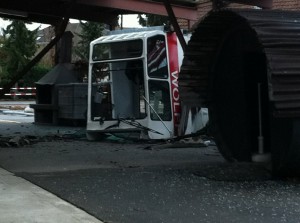 Potentially everything was intended to have been done right but water is simply not something you want moving around the base of your crane because it’s unpredictable in nature.

You can see more pictures Here