Another tree, another crane…

A large boom truck tipped over in Haddonfield, New Jersey yesterday while removing a tree from the back yard of a house.

The large boom truck crane with operator cab, owned by Dobbs Crane Rental, was working for Hyperion Tree Service. It was lifting a section of the tree which turned out to be heavier than expected causing it to overturn. A tree surgeon, working from an aerial work platform/bucket truck alongside the crane, panicked and jumped clear of the falling crane boom. He landed on the roof of the nearby house and was taken to hospital with a broken leg.

The operator of the crane was also trapped in the cab of the crane for over an hour as the boom contacted with the homes overhead power lines and he was unsure if they were still live or not. 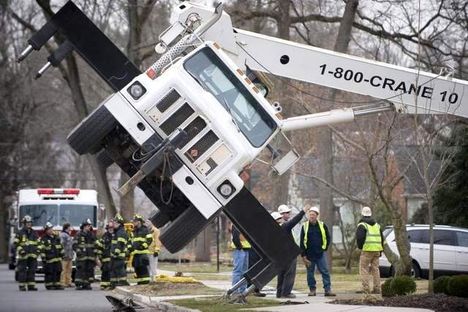 Two large mobile cranes were brought in to lower the boom truck/crane back into the upright position. This time the damage was slight and the man in the platform will recover. 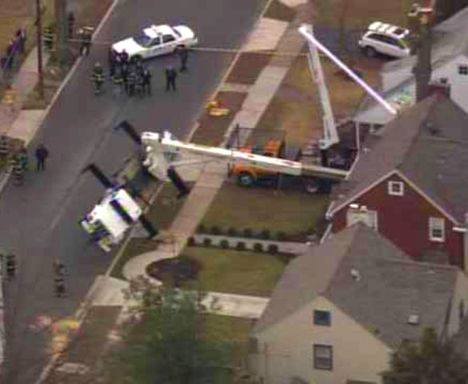 Crane companies routinely underestimate the weight of trees and you would think a professional tree company would know better… Looking at the pictures had the weight of the tree not caused the crane to tip then there was probably a good chance that having outriggers extended on grass with no outrigger pads would have anyway. The operator at least had the good sense to remain in his cab, until he was sure that the power lines were definitely turned off.

OSHA is currently investigating the incident.