Wind and weather played a role in last week’s Regional Qualifying Rodeo, hosted by Empire Crane in Syracuse, N.Y., as area crane operators competed for a spot in the MCM & CIC Crane Operator Rodeo National Championship, set to take place at ConExpo in March 2014.  The operators who took first and second place were familiar contestants. First place winner Caleb Dillensneider from Deerfield Valley Crane Service Co. competed in the North Oxford, Mass., skills competition in June, and Gregg Eldridge of Payne’s Cranes was the returning champion from the Syracuse Regional Qualifier in 2012. 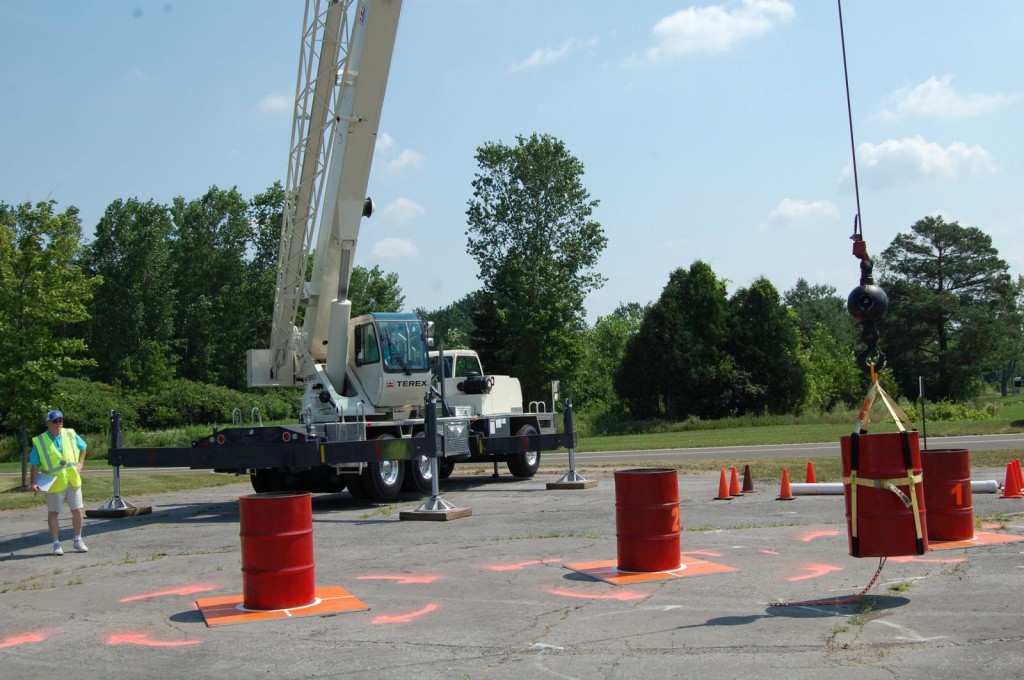 More than the course challenged operators at this event. The bright sun, high temperatures, and wind gusts had an effect on each operator, as they negotiated the course. The three tests included lowering the headache ball into two barrels without moving the barrel outside its designated circle, picking up a barrel and weaving it through a slalom course without lifting the chain attached to the bottom of the barrel off the ground, and lifting a PVC cylinder vertically and lowering it horizontally in the opposite direction without moving it outside the coned area.

Operators ran a Terex T340-1 truck crane at this regional event—a model that Paul Lonergan, president of Empire Crane, said was selected because it is a popular crane for the industry. Boom length was set for 70 ft. for each test on the course. Judges included Jim Headley of the Crane Institute of America, Henry Brozyna of Columbus McKinnon, and Jay Sturm of Cranes 101. All three are examiners for Crane Institute Certification, a nationally accredited crane operator certification program.

At this event, a father-son rivalry took place. Reigning Syracuse champion Gregg Eldridge was challenged by his son Thomas, who recently became a certified crane operator. “The last time I took a test like this was for my license,” Thomas Eldridge said. Although it was a close run, the father edged out his son for a top spot this year.

Gregg Eldridge said the course was similar in 2012, but he liked the challenge of the cylinder test. “The nicest thing about the course is you stand stuff up every day, but you are not tested on it,” he said, noting a recent job where he has lifting long concrete pedestals and uprighting them vertically. “This year’s course added difficulty with that extra challenge,” he added.

For the second year, Empire Crane hosted the event alongside an open house, inviting customers and vendors from Tadano Mantis, Manitex, Peterbilt, Terex, and more to attend and enjoy a barbecue lunch.

Eight more crane operator skills competitions are scheduled to take place in North America before the National Championship is held next March at ConExpo 2014 in Las Vegas, Nev. In August, professional operators will take part in competitions in Chicago and Lindale, Alberta. Visit www.craneoperatorrodeo.com for more information.