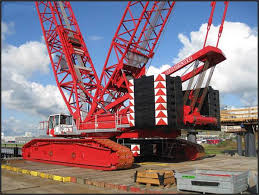 Terex Cranes announces that it is tracking recent reports of counterfeit Terex® crawler crane models originating from China. Similar to the incident reports of 2011, the Terex CC 2500-1 lattice boom crawler similar to the unit in the picture that is the crane model of choice for the copycat manufacturers.

The units are assembled, branded and sold as used Terex cranes well under market value. Also, majority of the counterfeit crane models reported to Terex Cranes tend to be commonly painted red and use the manufacturer’s legacy Demag brand. The primary markets of concern in this most recent wave of crane pirating are the Asian countries of China, South Korea, Singapore, India and Pakistan.

“We are aware of three different ‘designs’ of the CC 2500-1 crane on the market, and there are at least 9 or 10 fake cranes that have been sold, all originating from China,” says Klaus Meissner, director of product integrity for Terex Cranes. “This is a serious situation, and, not only because this infringes on our intellectual property but, more importantly, it poses a serious safety risk for our customers. The use of these inferior, counterfeit cranes can result in deadly consequences.”

While made to look like Terex units, these pirated cranes are often assembled with a blend of older and newer technology and components that were not designed to work together. These counterfeit cranes frequently exhibit poor weld quality, inferior steel structures and improperly fitted tracks. Additionally, many of the safety components designed into a genuine Terex crane are missing.

“Unfortunately going by serial number alone will not determine with certainty if the purchaser is buying a genuine Terex crane, as these plates can be fake as well,” adds Meissner. “Many of the counterfeit cranes were purchased either without an on-site inspection or through an inspection conducted by an unqualified person.”

Terex stresses the importance of conducting a thorough inspection of the used crane by a qualified individual prior to purchasing the machine, especially in the markets of concern. The safety of the company’s workers as well as individuals who happen to be in the area where the crane is operating depends on it.

Terex has established a special e-mail address for customers to inquire about the authenticity of the Terex crane they have already purchased or are considering purchasing. Customers can e-mail [email protected] with questions about a particular used crane model. Of course, the local sales teams (see http://www.terex.com/cranes/en/salesandsupport/Sales/index.htm) can be contacted as well.

Meissner also offers one additional bit of advice to those entering the used crane market in Asian countries. “If the deal seems too good to be true, it probably is,” he says. “Call us, and we will be happy to assist you in verifying that it is a genuine Terex crane.”