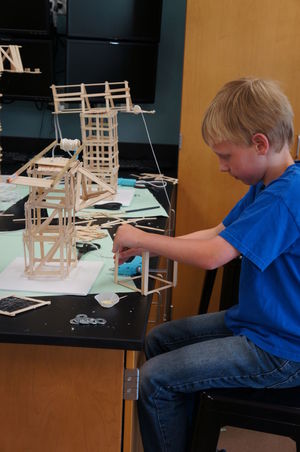 Shattuck-St. Mary’s summer Crane Camp brought together kids from the area to learn about and to build small, wooden cranes out of Popsicle sticks.

John Blackmer, science department chair at S-SM, taught the class geared for kids between the ages of 9 and 13.

All day, kids learned about how cranes functioned and then put their knowledge to the test while building their own.

“Each of the kids gets to build a crane based on their own ideas,” said Blackmer.

He didn’t give them any specific instructions, nor did he tell the students how to build the cranes. The only requirement was that each crane was at least three popsicle sticks tall and that the engineer incorporated elements they learned during the class.

In the morning, Blackmer taught kids how cranes worked and structures that made them successful. Students then tested the strength, height and how much stress could be put onto the cranes before they collapsed. The kids took what they learned from the experiments and applied them to their designs.

According to Blackmer, the students built their cranes primarily out of Popsicle sticks because they can be used in a variety of different ways.

“They allow kids to do anything,” he said. “They get to use their creative minds to create something new.”

Fifteen kids from all over the area gathered at S-SM to put their skills to the test.

Waterville native Taylor Landrun, 12, decided to stray from the typical crane design and tackle something a little more difficult.

“I think the tower cranes are boring,” he said. “So I made a crawler crane. It’s a fun challenge to build.”

Landrun’s crane sat on a platform with a long, beam-like tower of Popsicle sticks coming out of the base. The base could swivel, allowing the crane to pick up objects from a variety of locations. 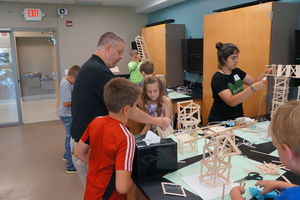 Instead of building as high as he could manage, Yetzer decided it was best to keep the crane short and simple.

Others in the class had been using triangle shapes to build the upper portion of their cranes, but Yetzer decided to do something different. He stuck with a square shape because he thought it would be stronger and easier to move.

Overall, Yetzer thought building the tower was the most difficult part of the crane construction because it required a lot of patience.

“By the end of that tower, almost all of my patience had been taken away,” Yetzer said as he glued more Popsicle sticks onto the top of his crane, a far less patience-trying area.