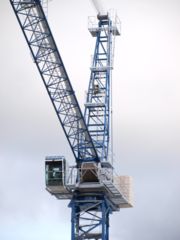 Tower crane manufacturer Linden Comansa has introduced two new models of luffing-jib cranes. The company says the new models will be available by the end of April. These new cranes, LCL 310 and LCL 280, altogether with the LCL 190 presented last year in Bauma, form the new family of luffing-jib cranes from Linden Comansa, which will be completed this summer with the launch of a fourth model, the LCL 165.

Among the advantages of the series, Linden Comansa says the cranes stand out due to the easiness for both erection and transportation. These cranes are designed with the hoist mechanism at the front, under the jib and near the cabin. The luffing mechanism, with its emergency second brake, and the electrical cabinet for the control of the crane are placed on the counterjib. This unique design allows users to reduce the installation weights and the slewing radius of the counter-jib. Furthermore, hoisting and luffing cables come preinstalled from the factory for faster installation of the crane.

Regarding technological characteristics, both cranes bring the new features included on the LCL 190 including the electronic coordination between the luffing and hoisting mechanisms that, with a push-button, allows to move the load horizontally when operating only the luffing movement (popularly known by “level luffing.” The hydraulic push and retention system, with a progressive force application on the jib in relation to the luffed-in radius, allows for smooth movement. The cranes also feature a travel control of the luffing movement and an anti loosening system for the luffing cable tension.

As well, this base can be used on the cranes 21 LC 750 and LCL 500, models, which could only be erected until now with the 10-meter base. With this new product, Linden Comansa completes its range and offers a new solution between the already existing bases, 6 and 10 meter wide respectively.

The company says the series include many technical and structural solutions that improve the performance of the cranes and optimize the retail price, achieving a completely new and highly competitive series of cranes.

Linden Comansa is also testing the prototype of the new Panoramic XL cabin, which will soon be available as an option in the LCL series of luffers and LC2100 series of tower cranes. The new cabin keeps the same advantages of the standard Panoramic cabin (acoustic insulation, full view of the load and work area and tinted glass), but it is half a meter longer, which means there is more space for the crane operator. The new Panoramic XL cabin will feature a small refrigerator, an air handling unit (instead of an air conditioning) and space to place a microwave or any other small appliance to improve the worker’s comfort.