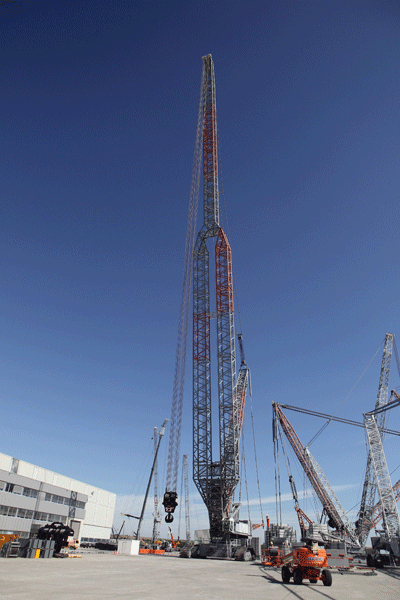 A new double boom system to increase the lifting capacity of lattice boom cranes has been launched by Liebherr in Germany. Capacity can be increased by more than 50% “with relatively little effort,” the manufacturer said.

Known as a power boom (P-boom), the design uses two lattice boom sections together at the base of the boom, which then separate into two parallel sections set apart from each other before joining together again towards the top (see photo). By adding the upper and lower P-boom adaptors, the capacity is increased into the next higher capacity class.

The power boom improves stability in the direction of the load and to the side, which also increases capacity with long boom systems. On the luffing fly jib capacity is increased as a result of the higher torsional moment of the power boom.

Power boom is an option on new cranes and it can be retrofitted to cranes already in the field. The adaptors can be used on several cranes of the same type. The slewing platform, derrick boom and luffing fly jib of the standard crane are unaffected.