In support of the National Commission for the Certification of Crane Operators’ policy of providing calculators for certain CCO written exams, Sicklesteel Cranes (Mt. Vernon, WA) has donated 20,000 calculators for candidates’ use. 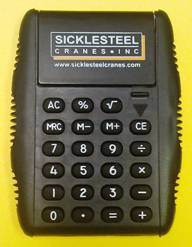 Since the new policy allowing calculators on specific tests went into effect two years ago, NCCCO has given away approximately 30,000 calculators to certification candidates. Only NCCCO-supplied calculators are permitted to be used on CCO examinations; for security reasons, candidates may not bring their own calculators into the secure exam room. Candidates using computer-based testing are provided with an on-screen calculator.

NCCCO began allowing calculators on specific exams over two years ago in light of a study conducted by International Assessment Institute (IAI), the company that provides test development and administration services to NCCCO. The study, The Effects of Calculator Use During NCCCO Testing, concluded that, while the use of calculators would not be appropriate for use on basic math questions contained in CCO Core exams, their use would be supportable on load chart calculations used on CCO Specialty exams.

“We’re grateful that Sicklesteel Cranes has agreed to make this major investment in support of CCO certification,” said NCCCO Commission Chairman, Ellis Vliet, “as NCCCO strives to maintain the highest possible standards of quality, integrity, and fairness in testing. NCCCO’s calculator policy has been popular among candidates, who also appreciate being allowed to keep the calculators for use in their daily work.”