A crane operator was rescued yesterday after his crane toppled over the side of a bridge.  The crane was working on a bridge job near Winfield Township in Butler County, Pennsylvania, lifting steel, when we understand it went over the edge falling around 28 metres, according to local reports. 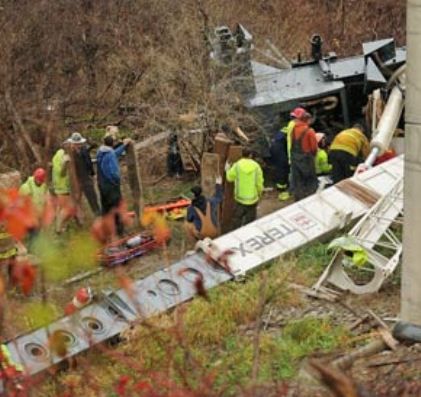 Rescuers tried to free the man, who was conscious, but trapped in his cab, rescuers tried using air bags, but as they raised the crane it started to move on the steep embankment. They therefore abandoned that method and simply dug the earth out from beneath the cab until there was enough room to extricate him. He had been trapped for just over two hours.

They then used ropes and a basket to pull him to safety on the road above. The victim was alert and talking to rescuers as they brought him up. He is employed by Russell Standard, the company carrying out the bridge work.

The cause of the fall is not known, the crane was apparently fairly new and in good working order. No information has yet been supplied regarding its outrigger set up.