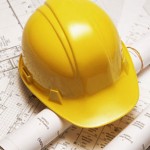 One man is lucky to be alive after the crane he was operating collapsed in Thornhill last Friday.

The accident happened around 8:30 a.m. at a construction site on the northeast corner of Dufferin Street and Steeles Avenue.

The crane was situated next to the building under construction, according to York Regional Police Constable Gary Phillips.

“About halfway up it buckled, and the crane toppled and landed on the roof,” he said.

The crane operator was transported to hospital and treated for a laceration to his head and a broken arm, Phillips said. No other workers were injured.