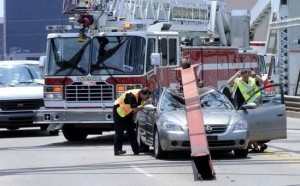 The Texas Street bridge has been reopened after a crane did not clear the first truss of the bridge, causing the arm of the boom to become detached and fall on top of a Nissan Altima traveling behind it about 1:30 p.m. today, according to Shreveport police.

The adult male driver of the Altima, whose name was not immediately released, was not injured.

The state Department of Transportation and Development inspected the bridge and determined it is safe for travel, a worker said. However, the truss, which was bent by the impact, will either need to be straightened or replaced, the worker said.

The crane, belonging to Bossier Sign Co. Inc., was at about 16 feet because it was not completely lowered, and it struck the first truss of the 14-foot-10-inch bridge, Cpl. Lonnie Haskins said.

“He just didn’t secure it correctly,” John Gates, service and installation manager for Bossier Sign Co. Inc., said of the employee, whose name was not immediately released. “He’s never had an accident. He’s good. I guess everybody has a bad day.”

Both drivers were taken to Willis-Knighton Bossier as a precaution, Haskins said.

Police are still investigating the incident to determine if there will be a citation.