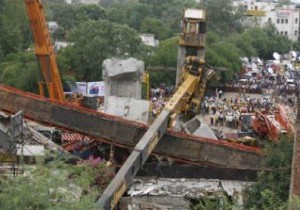 New Delhi, July 13 (Agencies): Five workers were injured on Monday when the site of Sunday’s Delhi Metro bridge collapse was hit by another mishap, as three cranes trying to remove the debris toppled with one of them falling on a row of shops. A launching girder also collapsed along with the cranes.

The latest tragedy occurred when hundreds of Delhi Metro workers and engineers had gathered at the site of the earlier accident overseeing the continuing efforts to remove tonnes of debris. Suddenly, one after another, three cranes collapsed amid a deafening roar, apparently unable to bear the weight of the launching girder, triggering a panic run in Zamrudpur area near Amar Colony in South Delhi.

A large number of policemen who had been deployed since Sunday also bolted following the accident. The mishap has hit the recovery operations at the accident site badly. The five injured workers were rushed to the AIIMS Trauma Centre. Delhi Metro Rail Corporation (DMRC) spokesperson Anuj Dayal said no one had been seriously injured and no one was trapped in the debris.

“There is a risk involved during relief operations. Outsiders were not allowed at the site. Now the barricades will be made stricter. We can only request public to stay away,” Dayal said. On Sunday morning, pillar number 67 on the under-construction Central Secretariat-Badarpur line near the Lady Shriram College had given way, and with it the bridge being built collapsed along with the launcher.
At least six persons were killed and another 15 injured in yesterday’s accident. Delhi Metro chief E Sreedharan had resigned in the wake of the bridge collapse but Chief Minister Sheila Dixit today made it clear that her government would not accept the resignation.

Today’s mishap occurred during clearing operations being conducted with the help of huge cranes. Traffic was already stopped on the Zamrudpur-Lady Shriram College route near the busy Nehru Place area. DMRC has set up a four-member committee to examine reasons for yesterday’s accident and it would submit its report in 10 days.
Describing the accident as “more serious” than the one that happened in Laxmi Nagar last year, Sreedharan had announced his resignation Sunday afternoon, taking “full moral responsibility” for it.