The hook of an improperly stowed telescopic loader crane seriously injured a man in Russia who had been pulled over by the police.

The man was pulled over by the police for having no number plates on his car, and was standing next to the police car in the centre of a busy road in Khabarovsk in the far east of Russia, when a small truck with a free slewing telescopic loader crane passed by at speed. The hook of the crane caught the man cleanly on the head, rendering him unconscious.

The 28 year old was rushed to hospital and is in intensive care following surgery for his fractured skull, his condition remains critical.

The truck driver was pulled over and later charged with driving while under the influence of alcohol and arrested.

This video is one of the clearest examples of why it is so important to ensure that a loader crane is properly stowed and secured. The same applies to any slewing machinery, even that stowed on the back of a delivery truck.

If a boom breaks free like this the chances of causing a fatality or two is exceptionally high, and yet many drivers do not take the subject as seriously as they might. 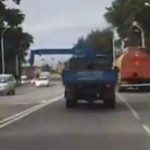