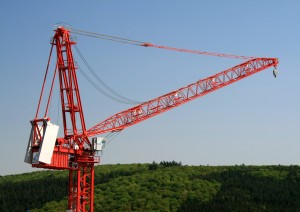 Based on more than two decades of experience in the tower crane rental sector and including the consultation of users, WILBERT Turmkrane – that just opened up a new tower crane factory eight months ago – developed a new top class tower crane. As the first member of the new “Heavy Lifter” family, WILBERT presented on their premises the luffing jib crane WT 1905L e.tronic. Alone, its performance standards impress, and exceed those of every climbable luffing jib tower crane that has ever been produced in Europe. The maximum load capacity at a radius of 25m (82′)  amounts to 80t (176,368 lbs) . At 78m (256′) radius there is still a load capacity of 19t (41,887 lbs) available. Compared to the European competition, the WT 1905L e.tronic offers more than 50% higher load capacities in the crucial field of medium and long radii. The hoist gear has a maximum speed of 185m/min (607’/min) and e.g. can lift 32t (70,547 lbs), more than 900m (2,953′) high, with double rope. Depending on the tower system and jib length used, freestanding tower heights of 70-140m (230′ – 460′) can be realized.

An international concept for a powerful tower crane in line with the market conditions does not only require extraordinary performance standards, there is also a high demand for reliability as well as ease of transport and erection. In this spirit WILBERT only uses parts purchased at renowned suppliers, for example gearboxes from Flender, ball bearing slewing rims from Rothe Erde and control technology from Siemens. The WILBERT typical optimization of transport measurements and component weights as well as a conclusive erection lead to unequaled economical usage in the 2000mt (2,205 st) class of luffing jib tower cranes. There is for example an easily to erect mono block tower system which does not exceed a transport width of 3.25m (10′ 7″). To reduce the transport height, a pinned connection can be undone at the tip of the jib to separate the unit of sheave’s. During transport, all pins for the jib connection remain in sleeves at the height of use. An auxiliary winch integrated in the tower head section eases e.g. the connection of the roller block to the jib stay. The proven style of the roller block has been taken from the WILBERT WT 205L e.tronic: the luffing cable can be transported in reaved condition which speeds up erection. Depending on the erection conditions, the weights of the main components of the WT 1905L e.tronic can be limited to 15t (16.53 st).

The practical orientation of the tower crane manufacturer can be seen in a number of safety equipment for erection and operation of this large crane. All components can be easily reached by means of ladders and platforms during erection. The sheaves in the jib carring the hoist cable are easily accessible from spacious platforms. In addition, the jib is equipped with two internal catwalks. During operation two load measuring systems offer redundant protection against exceeding the permissible load moment. The luffing gear is equipped with four standard secondary brakes; an additional disc brake for the hoist gear can be installed optionally. It does not need to be mentioned that all drives are frequency-controlled and allow a continuous adjustment of the operating speeds which is standard for all WILBERT tower cranes. The core of the control is placed inside a spacious, fully air-conditioned 6m (20′) container which protects from dust and weather. All electrical cables carry sockets to ensure fast connections to drives and cab during erection. The cab is also ergonomically designed and can be equipped with air conditioning as an option.

As an alternative to the standard cab WILBERT offers a wide-bodied cab with a lavatory and relaxation area which eases the crane operator’s working conditions especially at large heights.

Innovative movement of the counterweights 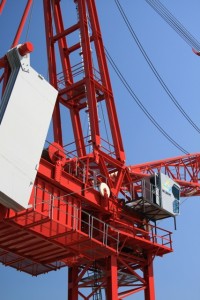 Typical for the WILBERT “Heavy Lifter” series is the “pendular counterballast” – a completely new way of attaching the ballast to tower cranes. The ballast plates standing on their tip are hung up at a ballast girder. A cable diverted at the jib connects the ballast of 80-145t (176,368 lbs – 319,667lbs) with the luffing jib. This leads to an inevitable semicircular movement of the ballast depending on the movements of the jib. For example when the jib is standing steep the centre of gravity of the ballast moves towards the middle of the tower. When the jib is moved in the opposite direction the ballast compensates appropriately. This reduces the torque on the tower system leading to a reduction of corner loads and enables larger freestanding tower heights. It is also an additional force that eases luffing down the jib against wind. The method of hanging up the ballast enables good access to all positions and an easier erection compared to current ways of installing moveable ballast.

Runner head instead of re-reeving

The designers of the WILBERT “Heavy Lifter” focused economy and flexibility with no loss to high performance to meet the individual customer demands. For the first time a tower crane could be equipped with up to 5 winches depeding on the requirements of the job site. The building set of the slewing part includes a counterjib which can be extended by intermediate pieces from 10.5m to 13m (34′ 5″ – 42′ 8″) depending on the load capacity required. The basic jib length of 36m (118′) can be extended in 6m (20′) intervals to adapt the jib to the requirements. Different erection varieties, special towers for large heights and an internal, as well as, an external climbing device round off the adaptability to the job requirement.

A new dimension for high-rise and plant engineering

A flexible hoist gear system provides a hoist cable capacity so far unknown for tower cranes and retains big load capacities at large heights. For example 64t (141,095 lbs) can be lifted into a height of 460m (1,509′) which eases the assembly of mega stanchions of skyscrapers. In plant engineering – especially in power stations – WILBERT “Heavy Lifter” tower cranes offer an appropriate alternative to the 500-800t (550st – 880st) lattice mast crawler cranes currently in use and establish a new era of large tower crane technology. Advantages determined to the system are:

In May, one model of the „Heavy Lifter” prototype will be delivered to the job site of block D and E in the power station Westfalen/Hamm with a freestanding tower height of 90m (295′) and a jib length of 60m (196′ 9″). When the new WT 1905L e.tronic was introduced to WILBERT dealers during its initial erection on 4th April 2009, one of them – immediately convinced by the concept – ordered a “Heavy Lifter” for a dockyard. For a power station project in a neighbouring country five additional “Heavy Lifters” with tower heights of up to 190m (623′) were ordered. Because of advantages determined by this system, the customer decided against the traditional crane concept of using mobile cranes. Franz-Rudolf Wilbert is encouraged from all the enquiries and orders and is proud to provide a revolutionary concept entering a new way of using tower cranes.

WILBERT Turmkrane GmbH is a new German manufacturer for tower cranes. In co-operation with the partner company WILBERT Kranservice GmbH a complete service package consisting of sales, financing, hire-purchase, rental, transport, assembly and disassembly is offered to the customers. Both companies belong to the WILBERT group that celebrates its 75 anniversary in 2007.