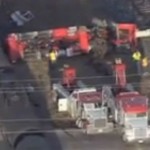 The Converse Police Department reports a train accident has occurred at Toepperwein Road and Gibbs Sprawl Road.  That’s where a train and some sort of mobile crane have collided.Witnesses say the truck was heading over the tracks when it got caught on the tracks. The train was within a few minutes away, already heading towards the truck and was unable to stop in time to avoid the collision.  The train conductor did suffer some minor injuries. He was taken to the hospital for treatment. The driver of the mobile crane was uninjured.