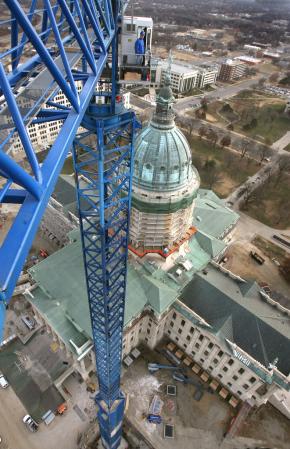 The massive crane that towers over the Capitol will get little respite through the cold of a Kansas winter as it supports the crew doing restoration work on the building’s exterior.

Jim Rinner, project manager for JE Dunn Construction Co., which is heading the Statehouse restoration, says the exterior work will continue through the winter, and the crane will be in operation when wind speeds permit.

The crane must be shut down when wind speeds at its upper reaches hit 35 mph, although it also can be shut down in lesser winds if the operator thinks conditions warrant.  Cold weather alone, however, won’t stop work through the winter on what Rinner calls the Statehouse’s “drum” — the area above the roofs of the building’s four wings and below the copper dome.

The crane was erected on site in August and became operational in early September. Rinner said Tuesday it is scheduled to come down sometime late next fall.