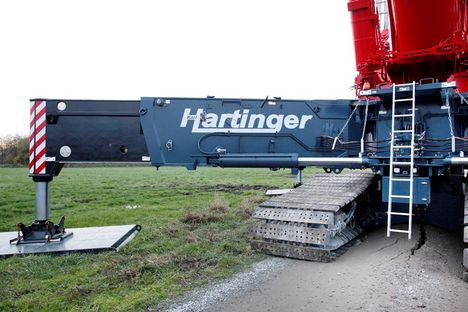 A strong risk assessment and planning, combined with a sharp operator saved a big crawler from tipping over. The crane, a 1,200 tonne Liebherr LTR11200 telescopic belonging to Karl Hartinger Kranbetrieb of Rimbeck-Warburg in Germany, was working on new wind farm being erected on moorland with a peat bog substrate. The crane, which features a narrow-track option- specifically for such wind farm work – had completed one turbine and was travelling fully equipped to the next one when the ground started to give way.

The crane had an all up weight of 415 tonnes and applied a ground pressure of 16.5 tonnes/metre. The move began without a problem, but then the tracks began to dig deeper and deeper into the sides of the road/track way. Then large cracks began to open up in the space between the two crawlers. One side of the road was clearly softer than the other and the track on that side sank further and further tilting the crane into a dangerously inclined position.

The operator, Burkhardt Hartinger the company’s junior chief executive, who had been operating the crane with its remote control, decided that the only option was to try and stabilise the machine as fast as possible, before it overturned. The outrigger beams were already extended in their star working formation with the jacks partially extended as a precaution.

In order to level the crane the jacks which had by now come into contact with the ground, had to be raised in order to allow further cribbing to be placed under the decent sized mats which were secured to the jack pads.

Thanks to the size of the mats Hartinger and his crew were able, not only to stabilise the crane, but also bring it back into a horizontal position. The company had discussed this scenario when planning the job and what procedures to follow when it happened. No one expected though that emergency plan would actually be required.

The next challenge was to remove the crane from what was still a dangerous situation and get back to work. The crew removed the lattice boom extensions and 80 tonnes of counterweight and found that this was enough to get the crane moving again.

In the end the LTR11200 was travelling again just three hours after it had started to tip. The turbines on this site, which is located near the Eastern Friesland town of Wiesmoor, are around 500 metres apart and the LTR11200 normally takes three to four hours from completing one turbine to starting the next.

The LTR11200 is routinely supported by a smaller telescopic crawler, the 100 tonne Liebherr LTR 1100, which helps with rigging and is also used to set up the tower elements. A work platform attachment is also used on the installation work.

The Wiesmoor site comprised six Enercon E-82 turbines with a hub height of 108 metres, all of which have now been erected without further drama.

The heaviest lift on each turbine was the blade star element weighing 51 tonnes, and which was lifted fully assembled. The radius for the lift was 18 metres at a height of 108 metres.

After completing this contract the crane then went on to Eisenach where, due to a steeply inclined site it was used in a pedestal format without its crawler undercarriage.

Wind farm sites such as this are challenge, in order to reduce costs it is of course desirable to travel between turbine sites fully erected, especially if a lattice boomed crane is being used.

However the road/track ways are rarely any wider than five metres – in this case it was 4.5 metres and the ground bearing capacity can vary as this example shows. The narrow tracked crawler undercarriages have been designed to travel on these roads, yet the tracks ride on the extremities of the prepared surface which is rarely as well prepared as the turbine sites.

In the past year or so two narrow tracked crawler cranes – both lattice boom models – have tipped over, a 350 tonne Weldex unit at the Maesgwyn site near Neath, in Wales last November See original report and a similar sized crane owned by KR Wind on a site in Sweden the year before. Thankfully there was no loss of life in either incident although the disruption and the cost were very high.

Sadly in both of those cases the cranes owners refrained from sharing the circumstances with the rest of the industry. If more crane operators would follow the Hartinger’s example further accidents might be avoided? It is of course much easier to share a near-miss than an accident which often has legal repercussions on top or reputational concerns.

The fact is that there should be a way to share and openly discuss information from near-misses like this and full blown accidents. This is area where ESTA, the SC&RA and other local crane associations could and should play a significant role.