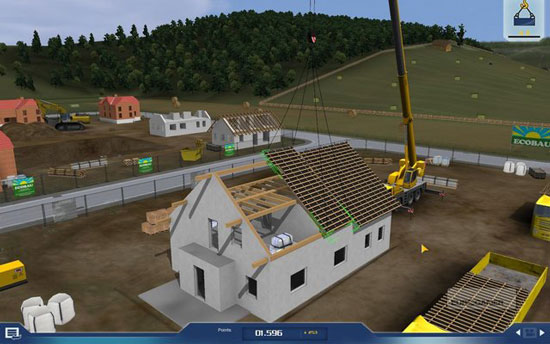 I’m not sure about you, but I never knew there was a crane simulation game out there. None the less one that looks like it would be enjoyable to play. Well, let me introduce you to Crane Simulator 2009.

Not 20 yards from my house is a penned-off area which the council, judging by the logo-festooned barriers, has clearly commissioned a contractor to work on. It’s basically a big hole in the road, and has gone untended for some four or five days now. Every time I walk past on my way to work, two emotions resume their daily struggle.

The first is a tutting sense of gentle outrage that a slice of my council tax is trundling slowly, inexorably, into the contractor’s purse as he juggles his teams around various jobs for maximum profit. Standard stuff; we all know it happens. And maybe this makes me a bad citizen, but my civic concern is soon shoved gleefully aside by the second: a kind of boyish wonder at the very innards of infrastructure. There’s a number of coloured pipes down there, that are obviously pumping vital services into houses like mine. What substance does the blue plastic pipe transport? And that huge yellow one next to it? If I was a little more Victorian in my principles, I’d roll up to the nearest workman, and inquire as to the nature of these services, just to know more about how it all works. If only I could find a workman to ask, obviously.

Crane Simulator 2009 caters to the second of these emotions. It seeks to engage the fascination men have with artifice and construction, and the skilled control of precision equipment. Building stuff to further the cause is in our blood, and that’s evident in so many forms of gaming. From the swiftly crafted series of passes and crosses culminating in the perfect goal, to upgrading a barracks so it can knock out stick-men with rocket launchers, it’s all about the build. How can Crane Simulator 2009 fail? 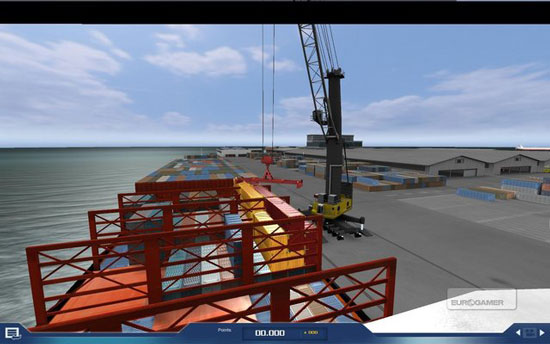 It’s a question of pace. Or in the unique case of Crane Simulator 2009, the desolate lack of it. The first ‘mission’ sees you in command of a Lieber mobile crane, tasked with the construction of a prefabricated house. Before you lies an empty plot where the wall-sections need to be placed; to your left sits a pair of trucks laden with prefab wall-sections. And so the scene is set. Go build!

But do it very, very slowly. Care and precision are the watchwords here, as your hands settle awkwardly on the cursor and page-up/page-down keys. Construction is a matter of slowly swinging the crane above the truck, slowly lowering and hooking the wall-section, slowly raising it off the truck-bed, slowly rotating the crane and extending it into the right position, and, yes, slowly lowering the piece into its allotted slot.

45 agonising minutes pass. The ground floor of the house begins to take shape, as you box the preset floor-plan into recognisable rooms. Time is measured by the chiming of a nearby church clock, the plaintive mooing of unseen cattle, the now-deafening chirp of a skylark, and the brain-porridging drone of the crane’s ceaseless motor. And then, incredibly, you find you’ve finished the ground floor! “You’ve earned a break,” the mission briefing tells you. “Yes, I do believe I have,” you think to yourself, satisfied with a job well done. And it really felt like work, didn’t it? 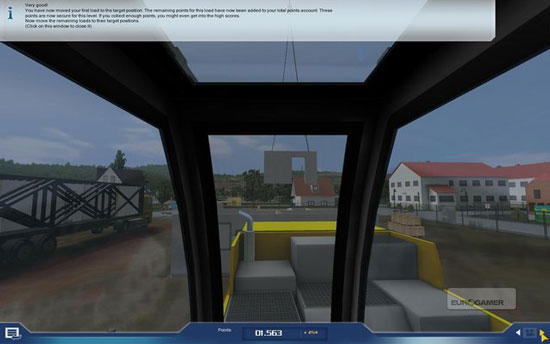 It’s at this stage you begin to wonder how to speed it all up. And the answer is, you can’t – not if you want to do well. Every time an item is plucked aloft by your crane, a points-ticker is activated, which begins a swift and demoralising countdown to zero. Every collision docks points, so the depleting value drops further still. You need to temper brevity with precision if you’re to score big, but because the entire points system is based around a rapidly diminishing score, you never feel like you’re being rewarded. It’s more a case of damage-limitation, and you always feel a little short-changed, no matter how well you do.

Then the penny drops: you don’t give a fig for the points. You want to get the damn thing finished, and – hopefully – earn the right to work on a really exciting job. However, wild swings make for pendulous loads which barrel around with Newtonian gusto. They take time to settle down before they can be lowered into place, and a really heavy collision can fox the physics engine completely. My impatient manhandling of a roof section saw it smash pell-mell into the side of the house and flip over completely.

As the game encourages you to work in a methodical manner, it’s no surprise the code appears to lack contingency for such devil-may-care actions, but it was still an eyebrow-raiser to see the upside-down roof section stuck in a madly elastic yo-yo loop as the physics engine went off its rocker. I can only imagine the expression on the foreman’s face as he watched his premiere crane-ace repeatedly battering the side of house with its own roof section in an effort to get it righted. 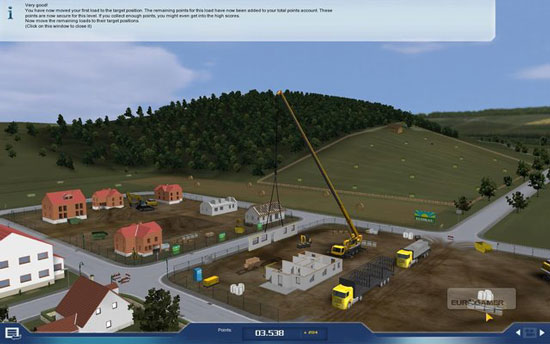 And finally, after two and a half hours of toil, the house was finished. What’s next? Placing the cap on a 100-storey hotel-monolith in Dubai? Raising the Leaning Tower of Pisa while emergency foundation crews rush in to save the wonder from critical subsidence?

Unloading cargo containers from a ship, and stacking them carefully, and oh-so-slowly, on the quayside.

Crane Simulator 2009 is a game that forces you to crawl when you want to walk. If some kind of patience-quintupling wetware came bundled in the box, it might make sense. As it stands, I find myself actually sympathising with the workman who downs tools halfway through a job to go and work on something else. If this was a true representation of construction, and it were really this boring, we’d all be living in the trees, looking down on half-finished streets lined with incomplete foundations.