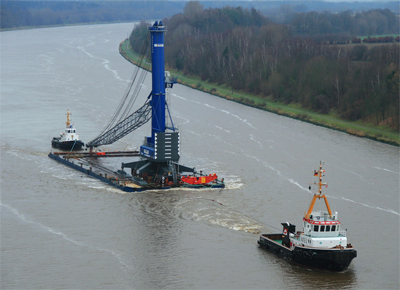 With a maximum load of up to 208 tons, the LMH 600 is the strongest quay crane in service in the Port of Hamburg. The key feature is that Liebherr’s Synchronising Crane Control System which permits synchronised operation of two Liebherr port mobile cranes in tandem, using only one crane driver, hence increasing the ultimate load of the cranes.

The Vertical Line Finder equipped with a diagonal-pull display enables any heavy load to be raised free from vibration and more rapidly positioned in its stowage position, says Wallmann. “With the new crane we shall be superbly equipped to cater for increased customer requirements,” says Hans-Dieter Wilde, managing director of Wallmann & Co.

The crane was built in Rostock by Liebherr and brought to Hamburg on a pontoon by barge through the Kiel Canal via Kiel and Brunsbüttel. To position the heavy-duty crane at Wallmann & Co’s terminal, the pontoon was initially secured at right angles to the edge of the quay by steel hawsers. When high water arrived, the crane was rolled from the floating bridge on to the facility. During discharge, the stability of the pontoon needed continuous adjustment involving ballast water adjustment.

The crane itself weighs a total of 576 tons (522 tonnes), has a height of 38.4 m to the towerhead and standard support base dimensions of 14 x 14 m. The swing gear of the mobile crane can be extended to a radius of 12 to 58 m. At minimum radius, the maximum lifting height across the quay is 45 m.

“After acceptance testing and briefing for the crane drivers, our new mobile crane is to be taken into service immediately. In December alone, we are anticipating five consignments that will require tandem handling of the full load,” says Hans-Dieter Wilde.

Writing is not a mystery.