Höhns-Bau was already using a Potain MDT 218 on the HafenCity jobsite but, according to managing partner and engineer Jens Höhns, the acceleration of the construction schedule meant it required a second crane to be erected on site. 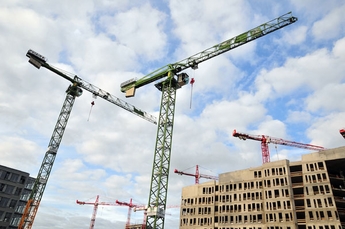 “There were two options available to us,” Höhns said. “Either we could erect a larger crane, farther away from the project that could swing over the construction.

“Or we could erect a topless crane with a shorter jib that would swing underneath the crane that was already erected. We chose the second option.”