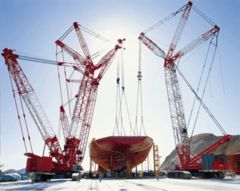 While the world market for crawlers above 2,000 tonnes capacity has taken a backward step in recent months, demand for machines in the 1,000 to 1,700 tonne range is still proving to be relatively strong, particularly in China.  Outside China, Japan-based Hitachi Sumitomo Heavy Industries Construction Crane Co, has launched two crawlers this year. The models demonstrate the demand for increased flexibility. The 200 tonne capacity SCX2000A-2 has a 272 kW engine, equivalent to that commonly found in 275 tonne machines, says the company. In addition, the crane has a counterweight self-installation and removal device adapted from Hitachi Sumitomo’s larger machines.  Although lower capacity crawlers, below 100 tonnes, are experiencing difficulties in Western markets and other previously booming regions, for example, the Middle East, there are other areas where demand is still growing.  While the economic downturn continues to hit hard in North America, the South American crawler market, particularly Brazil, is growing. Kobelco is just one global manufacturer seeing sales in the country. “Our cranes that are being used there are mainly brought by European crane companies but local contractors have started buying directly from Kobelco,” says Maruo. “We are not sure how big the potential is, but the market is new and we are interested in it.”

What holiday is this anyway? Well, happy whatever!