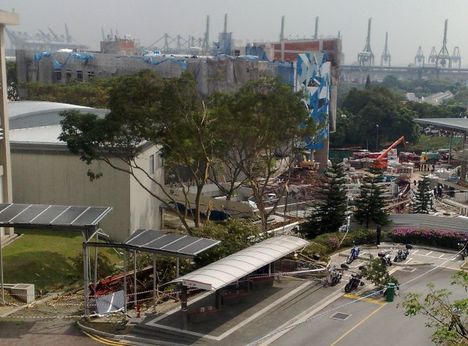 Singapore’s High Court has held a structural/mechanical engineer liable in a civil suit for the collapse of a tower crane that killed three people.

Engineer Tan Juay Pah, who is also an authorised crane inspector, will have to pay damages to crane supplier Lee Tong Boon, who in turn has to compensate the main contractor Kimly Construction for the accident.

The crane was working on the redevelopment of the National University of Singapore in February 2008 when it went over. The subsequent investigation revealed that the crane had defects in its tower foundation anchors which should have been picked up prior to it being erected on site.

The accident stopped work on the site for 25 days while the investigation was carried out. Lee Tong Boon had successfully argued that if he should lose the claim then Tan should be liable for paying the fine.

Justice Tay Yong Kwang, said: “It is clear in the documents that Mr Tan had endorsed the checklist for the inspection and testing of the tower crane under the relevant regulations, even if he did not have the opportunity to inspect the mast anchors before the erection of the tower crane took place.”

Tan had been hired by the crane’s owner – Lee- to assess its suitability for the job. In November 2006, he conducted a load test on the crane and certified it fit for use. He also certified that its critical parts had been checked for flaws and were found to be sound. 12 months later when the crane was due to be erected on the university job site, he was employed again to check and certify it, which he did.

Expert witnesses called by Kimly and Lee all agreed that Tan was responsible for the crane’s collapse, as he should have spotted the defective foundation/tower anchors before the crane was installed.

In his defence Tan maintained that he had no case to answer as the evidence was unsatisfactory and unreliable and did not establish a case in law. He also named the engineer hired to design and supervise the building of the foundation for the crane, and the company that erected and maintained it. Those claims were dismissed with costs.

Tan is considering an appeal against the judgement while Lee faces criminal charges in relation to the accident.

You are the essence of your reactions and your responses.

Have a niche you need scratched?