Two construction workers were seriously injured and another knocked unconscious when a tower collapsed on a building site in Bangkok, Thailand on Friday. 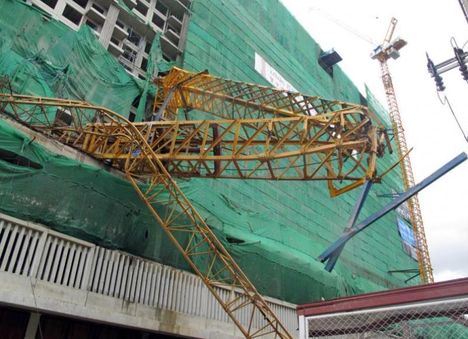 The crane’s tower appears to have pulled out its anchors, throwing clouds of debris and some steel parts into the street and onto nearby houses. Having lost the support of the ties the tower gave way and folded in a twisting motion.

One man lost his right leg while a female employee had her right heel cut off. A third man was found unconscious on the site. All three were rushed to hospital for emergency treatment.

The crane was being used by TTS Engineering on a 26-storey building in the Din Daeng district. TTS manager Songwuth Suwannasirikul and the chief architect Sakchai Phalangsuriya were taken by the police for questioning.

Police said they are looking into the possibility of filing charges against the construction company.