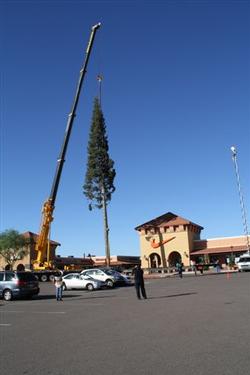 PHOENIX – The tallest Christmas tree in the nation arrived this morning at Outlets at Anthem in Phoenix. Measuring a little over 110 feet and weighing 12 tons undecorated, this white fir was delivered 750 miles from the Shasta Trinity Forest in Northern California this morning, says a representative for Outlets at Anthem.  The tree, which is roughly as tall as The Statue of Liberty from heel to head, will be decorated over the next two weeks with a team of 14 using mobile cranes. More than two miles worth of light strands and 3,000 ornaments will be added to the tree, which will weigh 16 tons by Nov. 10.  For the past eight years, Outlets at Anthem has displayed the tallest tree in Arizona. This year’s tree is over 30 feet taller than last year’s, making it the tallest in the United States.