We are pleased to announce that professional trainer and funny man Steve Rizzo has agreed to become a regular contributor to Craneblogger.

Steve’s Bio is as follows: 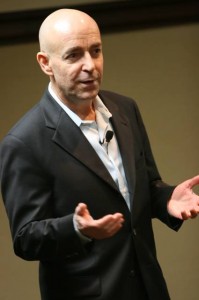 After being told by a guidance counselor that he didn?t have the intelligence for college, and having been saddled with the dubious high school honor of ?Least Likely to Succeed,? Steve Rizzo didn?t give himself much of a chance to emerge as anything special, much less a world-class comedian or motivational speaker.  Years of negativity had led Steve to believe that dreams were the luxury of only a fortunate few.

?Looking back,? says Steve, ?I can see how and why I sabotaged so many opportunities.  My perceived limitations had me very confused.  I had a fear of failure and a fear of success. I knew I had talent, but I couldn?t understand why I wasn?t being given a chance.  I finally realized that opportunity had been knocking all along?I was just afraid to open the door.?

After high school Steve would go on to surprise everyone, including himself, by excelling with honors at the university and post-graduate levels.  Eventually Steve even taught at his old high school, proving once and for all that guidance counselors are not fortune-tellers.

Of course, the surprises don?t stop there.  What is the next step for a comedian in the prime of his career?  For Steve, it was to trade the two drink minimums and standing ovations for maximum fulfillment and well, more standing ovations.  After walking away from a promising career as a headline comedian to become a professional speaker, Steve offers a unique and insightful perspective on the journey that brought him to where he stands today.

Steve?s quest to remove the boundaries that were keeping him from the life he truly desired has brought his work full circle and he now understands that all of his past experiences were necessary to prepare him for his true calling: To help people learn to be happy and successful no matter what their current circumstances are.  ?If they laugh while they learn,? says Steve, ?then that?s just a bonus.?

Steve spent much of his own life learning how to pursue and achieve his own definition of success. Luckily for audiences worldwide, that definition has evolved to include showing others his blueprint for realizing their dreams and achieving personal excellence and professional satisfaction.

As Steve?s friend and fellow comic Drew Carey <http://en.wikipedia.org/wiki/Drew_Carey>  says, ?He used to be a stand-up comic, but now he is a speaker who is inspiring people all over the world.?