Conviction, but no blame for fatal crash, for Marquette 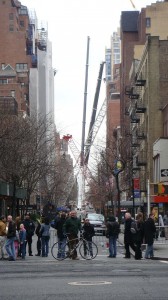 The final criminal case related to two New York tower cranes that collapsed in March and May 2008 has convicted inspector Edward Marquette of misconduct and offering false documents.

The court found Marquette offered false documents while he was a crane inspector for the Department of Buildings.  It acquitted him of all charges related to a crane that collapsed on E 51st Street, just 11 days after he should have inspected it.  The case is one of a series related to the collapse of two cranes in the spring of 2008, both owned by New York Cranes and Equipment.

Marquette’s case came shortly after the conclusion of the trials of crane owner James Lomma, and mechanic Tibor Varganyi.  The two had been charged with criminally negligent homicide over the collapse of a crane at E 91st Street, just a few weeks earlier, in March 2008.  In that case, Varganyi had pleaded guilty. Lomma fought the charges, and was acquitted.  Marquette was scheduled to inspect the crane on E 51st Street on March 4, 2008.

He didn’t perform the inspection. The crane collapsed 11 days later on March 15, killing seven people and injuring 24.  The collapse was due to a defective nylon sling holding up a tie-in collar during jumping, installed by rigging contractor William Rapetti. Rapetti also faced criminal charges. He was acquitted of manslaughter in July 2010.  Marquette waived his right to a jury trial.

The case was heard by Justice Thomas Farber at the New York Supreme Court.  Prosecuting attorney Robert Morgenthau charged Marquette with 12 counts, including offering a false instrument for filing, tampering with public records, falsifying business records and official misconduct.  The false instrument count was punishable by a maximum of four years in prison, making it the most serious in this case.

Morgenthau alleged Marquette filed a false inspection on the unsound crane on March 4, 11 days before it collapsed on a building. Morgenthau said cell phone records showed he was at home when he had reported that he was inspecting it.  Defense attorney Andrew Freifeld said that Marchette’s superior had never sent him to the site, but had asked him to say he had. Marquette had noted the address of the crane as a reminder to talk to his superior, he said.

‘When the crane collapsed and [department of investigations] personnel went to investigate, the document that they went to look for among others was the route sheet; and that’s because that’s where you want to go if you want to find out whether an inspector was doing what he said he was doing at the time he said he was doing it’.  Farber found Marquette guilty of offering a false instrument for filing, falsifying business records, and official misconduct.  The misconduct took place not on the date of alleged inspection of the collapsed crane, but on two dates in January 2008, when Marquette was shown to have falsified inspection of six cranes, he said.  The justice said that he would not have found criminal conduct in the running of an occasional errand, but noted this was not a single occasion.

He found “…a pattern of practice for the defendant to represent that he was in places where he was suppose to be when, in fact, he was no where near there.”  Freeing Marquette from blame for charges related to the failed crane, the Justice said prosecutors hadn’t shown that the route sheet had been officially filed.

He also found Marquette not guilty of charges relating to tampering with records based solely on the prosecutions’ inability to prove that his paperwork had been tampered with.

Justice Farber said he would not set bail in the run up to Marquette’s October sentencing, noting that he had been to every court appearance for the past five years.

This trial sees the close of inquiries following accidents that provoked widespread concern among the public and politicians in New York and around the world.  They led New York Department of Buildings to adopt 25 new laws, including having inspectors on sight to oversee tower jumping and lowering operations.

The new laws will help the city reach the US government’s goal, enforced by Occupational Safety and Health Administration (OSHA), of nationwide operator certification and five year recertification by 2014.

Flying from Point A to Point BS on Any Airline