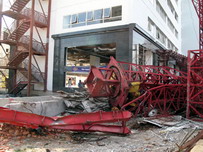 
A tower crane building a 20 story building collapsed. Three workers were killed, but their locations, be they on the crane or building weren’t indicated. One of those that died was the crane operator.
The crane appears to be an old Kroll design judging by the tower top and turntable. if that’s the case, the crane could be as old as 50 years and it broke just below the turntable. I’m not personally familiar with handling the model of crane. The quality of the picture is poor and so i’m not sure if the area that broke is a part of the turntable still or in the mast. If anyone can tell, feel free to comment.
I’ve said it before, and I’ll say it again, I don’t know why these old cranes are up and running. Micro-cracking, corrosion both internal and external, accumulation of dents or other items not addressed because there isn’t the value left in the crane to address the problems are realities to consider. If you are a General Contractor, you should consider that even if you have the best inspector in the world, you have years of paint covering corrosion and many layers of paint. Filling in dents with bondo is cheaper than replacing a lacing. and other things prevent a good inspector from finding every potential problem. Not to mention, how much money do you save going with the older crane when it increases your downtime and your exposure to accidents?
Original Article | Written By: Gaytor Rasmussen
3 Workers Dead was last modified: July 6th, 2010 by Ernie Pierini
Crane Accidentcrane crashcrane newsCrane Safety
0 comment
0
Facebook Twitter Google + Pinterest

Two loads dropped in a week