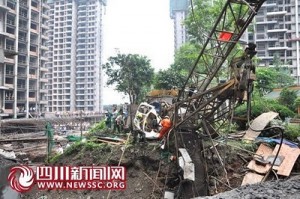 5 workers were atop a 30 meter tall crane when it collapsed killing 2 and injuring one. The two that survived without injury climbed down the mast.

Looking at the picture it would appear that only the superstructure collapsed. With two being on the tower, and an operator in the seat, two scenarios come to mind. The first and most likely is that the crane was going to be climbed and was not properly attached to the climber. We’ve seen this happen all over the world and sadly is a common mistake.

The second scenario that comes to mind is possibly the crane was being prepared for dismantle. If the mast bolts are loosened too, much or prematurely at all (depending on model), the crane will be subject to collapse.This job site and the crane both appear to be in terrible condition visually, which often speaks volumes to me.